I was pretty nervous leading up to the day, thanks to my experience last time (read: failure). And after having to wait two more months for another appointment, I felt a lot of pressure to make this time work. And it did!

Here’s what I did different this time around (besides praying 100x more):

–I used a different type of prep. Instead of the drinking a gallon of what can best be described as salty pool water (Golytely), I had two 16 oz bottles of Robitussin-tasting liquid to drink, one at 4 pm and the other at 9 pm. Each bottle was followed by two 16 oz glasses of plain water (Suprep). The GoLytely prep had absolutely no effect on my bowels, but made me completely nauseous, thus I threw it all up in two hours. This time however, I felt my guts working about an 1/2 hour after drinking the first glass. Score! I HIGHLY recommend you ask your doctor for another option if s/he suggest GoLytely. 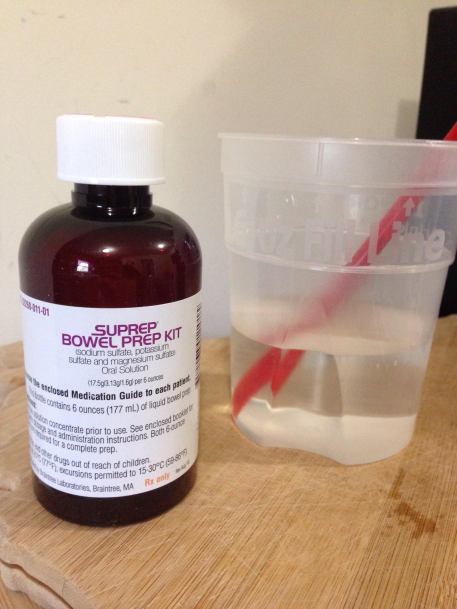 -I began my prep two days ahead of time. Instead of waiting until the day before, on Tuesday I drank a bottle of Magnesium Citrate to help flush out my system. I did this because I know that I am SERIOUSLY backed up and I wanted to help the process. This is definitely not necessary for the average colon, but for me, I knew it would help tremendously. The drink is definitely not a regular, everyday stool softener, so I wouldn’t drink it just anytime.

-The day before my clear liquid diet, I ate easy-to-digest foods. I had oatmeal, saltines, soup, juice, and smoothies. No need to make my slower-than-average colon work any harder than it has to. I believe this helped a lot.

-I made my own jell and drank chicken broth throughout the day. Last time I think all the sugar from the clear liquid diet made me feel really ill before I even began the prep. Thanks to the advice from others, I drank chicken broth and the saltiness/savoryness helped to settle my stomach. I also made my own jello by mixing apple juice with unflavored gelatin. The jello was hardly sweet at all, but I was still able to do some chewing. Oh, and I sucked on green jolly ranchers throughout the day. It helped to keep the nausea at bay, especially in between prep solutions.

-Lastly, I took it easy on the day of my clear liquid diet. Last time, I had to be at work for half the day, but this time around I was able to stay home and work on my blog, do a few things around the house, and relax. No headaches from having to stare at the computer. I also was able to sleep in so that left me with less time to be hungry!

For the colonoscopy, I was up at 6:20 am for my appointment at 7:00 am. I was feeling a little nervous that I wouldn’t be “cleaned out” enough and the doctor wouldn’t be able to see everything. Thankfully, he said it was a-ok! Once they took me to the back, things happened really quickly. I was hooked up to an IV as well as wires that monitored my vitals. When they pulled my bed back into the room where the procedure was going to take place, I started to feel pretty nervous. I was still wide awake! There are many things I’d like to be awake for- but a tube up my butt is not one of them! Finally, as the doctor was putting on his robe, the anesthesiologist shot the medicine into my IV and I was out within 30 seconds. That was a close one.

Next thing I know I am in the recovery room feeling a little giggly. I’m kind of embarrassed about how talkative I was afterwards, but Terry said it wasn’t bad. The worst thing about the whole procedure, which was overall pretty much painless, was the gas build-up inside me afterwards. Since “trapped gas” is one of the many symptoms I already deal with, it wasn’t foreign. The pain radiates up into my shoulders, back, and even chest. The only way I can really pass gas when this happens is to get in weird yoga positions- which I did, once I was in the safety of my home, haha.

Anyways, after talking with the doctor it appears that nothing is anatomically wrong, i.e. no blockages. While I realize this gives me no real answers, I am glad to know that I will not need another surgery (because nobody has got time for that!). More than anything though, I am thankful someone looked at my problem seriously. After talking to many doctors who simply told me to take Miralax (which hardly works and makes the gas pains 10x worse) or eat more fiber (which is probably more harmful than helpful in my case), I am glad that this doctor looked a little harder. I am meeting with him in a week or so to discuss treatment options and I’m planning to be very proactive about it.

My brother actually came to stay that night before heading back to college, so I eagerly suggest we go out for calzones. Random, but I had a coupon. Veggie calzone for me, meat lovers for the boys. 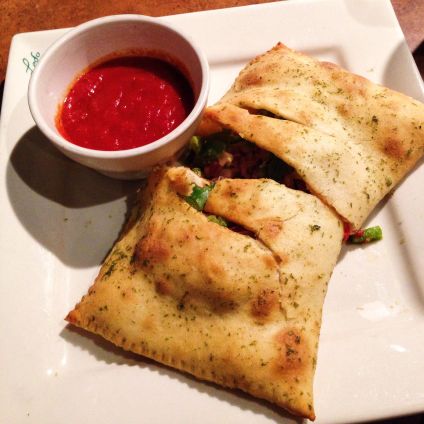 We laughed because the calzones kind of looked like giant Hot Pockets, but as my brother described them, they were “money.”

^He insisted on that pose, by the way.

How have I felt the last few days? One weird thing is my chest starts to hurt while I’m eating. I think some of the chest pains are trapped gas, since my body tends to do that a lot. Joy. I plan to talk with my doctor about that today. I also have had periods of feeling shaky-hungry, especially the two times I worked out. Raw veggies and meat in general hasn’t seemed very appealing… which lead me to another discussion: my diet.

I’ve been thinking a lot about how I can use my diet to improve my health. I’ve tried the low-FODMAP diet (here’s a little bit about my experience), but I didn’t get the results I wanted. I’ve read that some people have success with the paleo diet, but I just don’t know if I could do that. I love grains and blame beans way more anyways. It’s very frustrating thinking about what would be best for me… I am fine with trying new things, but it is hard when I can’t find specific answers. There seems to be a lot of advice for IBS-D, but less for IBS-C. Anyways, I’m hoping my follow-up with the doctor will last more than 2 minutes so I can ask him all the questions I have.

That’s basically the gist of it. Probably way more than you wanted to know… BUT I hope someone one day Google searches “everything and more about a colonoscopy” and finds this post helpful. I know I would have! Or maybe this is just one of those posts that in the future I will be glad I documented. 😀

23 thoughts on “My colonoscopy (everything TMI)”