This weekend was fun! (Well, a mix of fun and work.) Luckily for me I had Friday off from both jobs which meant the weekend started Thursday! 😀

Thursday night we decided to hit up our local Farmer’s Market. Rock Hill is home to new store, Provision Local Market which offers lots of organic foods including meats and dry goods. It’s pretty hip while still being a “country store”, complete with Nehi Soda and homemade candy. Terry especially appreciated their root beer selection. He picked out one to try, and we were both impressed with it.

We walked around and enjoyed the wonderful summer night. 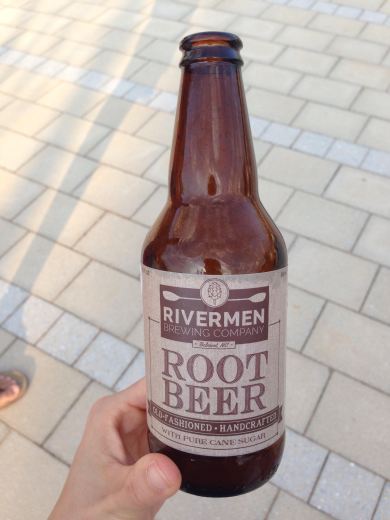 Friday night we went back downtown for a community-wide event, Food Truck Friday. Terry nor I had ever eaten from a food truck before, but we were inspired to do so after watching Chef. I think it’s awesome Rock Hill is hosting these types of events.

I was impressed with the number of truck present (it was around 8 or 9) in addition to Italian ice stands, face painting stations, and games for kids. I loved how family friendly it was while still being relaxing.

It was so hard to choose the truck we wanted to get food from, but we decided to get a better taste of things, we’d both go to different trucks. Being on the low-FODMAP diet made it a little more difficult, if only become the vegetarian options sounded SO good, but they were usually made with legumes. Also, there were a ton of sandwich options, but unfortunately gluten is a FODMAP.

Terry ended up going with Slow Smokin’ BBQ. He picked the 1/2 lb plate with mac n’ cheese and potato salad as the sides. It was a great deal for $9.

I went with International Slider and got the Brazilian Churrasco Steak sliders, but on field green. There was a drizzle of pesto sauce that brought it up so many levels. I also appreciated the fried plantains that were added. This is only my 2nd time eating beef, as I am trying to eat at least 1x/week, and I have to say I enjoyed it! However, it was so meaty and I still just can’t get into consuming so much! I needed more vegetables (and bread…), but the flavor was wonderful. 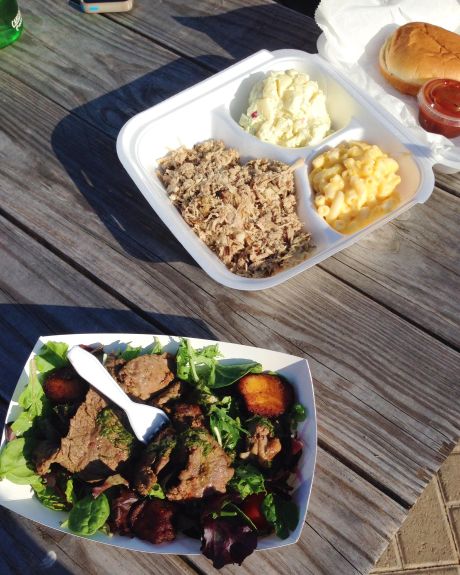 It was incredibly hot outside, so we were both sweating bullets by the end of it. I love hot weather, but I do wish there was a shaded area to sit in so we didn’t have to eat directly under the sun. That’s really my only complaint. I think we could have bypassed that at least a little by going later, but we were scared by talks of really long lines.

To remedy the heat, we decided to stop by Aloha Sno for some sno-cones, cherry for me and pina colada for him.

The live music was great. Terry made the observation that events like this in the south, the band is pretty much always a country band. We are both wondering what the music usually is at family fun community-wide events in other regions?

Saturday after work my Mom came to visit. We ate lunch and browsed around stores. I love when my parents come to hang out.

Later in the afternoon, Terry took this picture of me in the store and I notice how whenever I’m in a photo I revert back to my middle school cheerleading days. *Hands on hips*

Saturday night the men’s ministry at our church hosted a luau.

It was fun! Hanging out and laughing with members of our church was great. 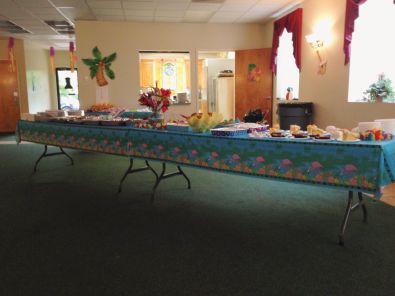 The food was delicious too! I found low-FODMAP safe foods too. I went heavy on the green beans because my lunch was devoid of veggies and I can only not eat veggies for so long. Also, isn’t summer corn the best?! So flavorful! 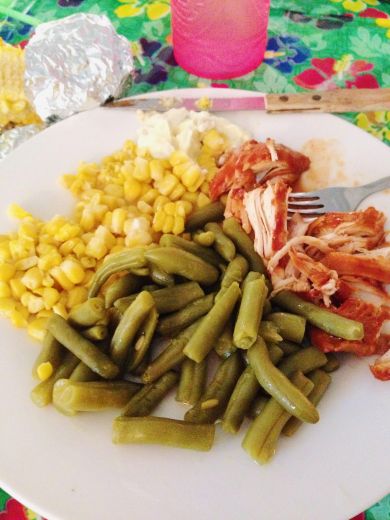 Sunday was work, blog work, a work out, and church. You know the joke- how about a weekend to recover from the weekend? 😉

2 thoughts on “Food Truck Friday and a Luau”