Last night we took advantage of a sweet gift Terry received for his volunteering at a school nearby. We turned a gift card into a wonderful, fun date night at Red Lobster. I absolutely love fish, but don’t have it nearly as much as I’d like. We eat tuna a lot at home, but I just haven’t quite mastered fish cooking. It is pretty much always better at restaurants.

Yesterday we were officially married 360 days. Not quite a year, but still I found the number symbolic. Like 360 degrees, I feel like we’ve gone from feeling like life was normal (pre-marriage) to abnormal (beginning of marriage) and now back to normal.

Salad + cheddar bay biscuits (this meal starter combination may be Red Lobster’s greatest feature.) Terry opted for the 4-course feast so he also got some yummy clam chowder. 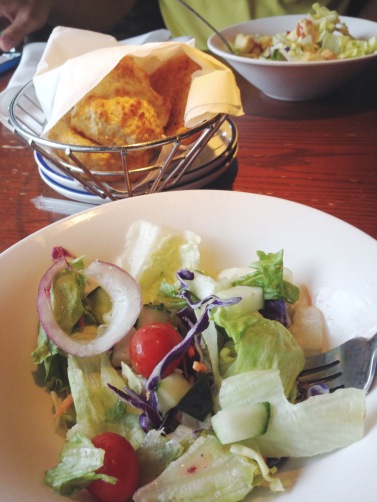 I’ve learned so much about Terry, and my self, over the last year. While dating it was like we were slowly revealing sides and histories as we got to know each other. Being long distance for almost 4 years prevented us from ever “getting tired” of each other. I sometimes wondered if after seeing me everyday Terry would reach that point.

Wild-caught Flounder w/ crab stuffing + broccoli for me. The plate was 2x what you see here. Perfectly tender and seafood-y.

Luckily for us (more likely by the grace of God) we never got sick of one another during our first year living together. Annoyed? Yes. Hurt? Sometimes. Those things happen when you’re being real, open, and honest with another human being. The important thing in marriage, unlike having a random roommate, is that those things are voiced and aired out. It takes practice and vulnerability, but it is key to remaining happy. Not that happiness is everything, because it’s not. Sometimes being sad or angry for the other person makes perfect sense. It’s feeling for one another that helps the continuing combining of two people. You and I becomes we.

Terry ordered the shrimp + scallop Alfredo. He gave it the thumbs up. We both had some left to take home (yay! lunch.)

Vulnerability, consistently checking up with one another, not just skimming over the deep things- this is what it takes to build a healthy marriage. Perhaps I really mean healthy “first year of marriage”, but I won’t know that until later down the road.

Dessert! Terry opted for the caramel cheesecake. We both were sufficiently stuffed, so the palm-sized dessert was perfect.

We have both grown & matured, as 20-somethings often do, but we’ve made sure to grow together. The abnormal has become normal again. I don’t take the normal for granted either, we are right were we are meant to be and I embrace every bit of it.

Coming home to an eager puppy is also the norm now too.